Not Gentle On My Mind

There's a song called "Gentle On My Mind" by a boyhood friend of my father. I remember us playing it on the old record player when I was a kid. Some things, actually, many things are NOT gentle on my mind. I live in a world which I do not understand. I have little hope of ever fitting into mainstream society. I can not accept things as they are and I struggle to change things to how I believe they should be. I follow a set of rules that many people never learned or have long since forgotten. I told a bold faced lie to a complete stranger today and I justified it to myself and the Great Creator by telling myself that in was for a good cause. If you've got a wee bit of time, then make yourself comfortable and I will explain what I mean by all of this.


There are many things that are NOT gentle on my mind. I'll spare you my laundry list of what I see as being wrong in the world today. I'll not go into the issues which I find to be the most worrisome which affect the human race and life on this planet as we know it. I'll narrow the focus down to a pin point of the plight of the American horses. I do not understand how we've allowed American horses to be sent Canada and Mexico to be slaughtered, for meat to be sent to Europe & Asia, to be served in upscale restaurants. That industry was BANNED in the USA almost five years ago, but we've allowed 100,000 AMERICAN horses YEARLY, to be shipped beyond our border to, excuse the pun, feed the very industry WE THE PEOPLE rejected in 2007 by banning horse slaughter. On so many levels, this is just plain wrong. I could go on for hours about WHY it is WRONG, but I'll spare you that too. I'll leave it at this: Horses are NOT a part of the American diet and WE, the USA may be held responsible for poisoning the people of Europe & Asia because American horse meat is chock full of toxins from the routine medications that horses in this country receive. I can NOT accept the way things are and I struggle to change it.  Many other aspects of our world, of our species leave me dumbfounded time and time again. There are "Causes on Facebook" that are formed and operating that have 8,000-10,000 members that are AGAINST the slaughter of American horses. I joined a few "causes" after the official petition to ban horse slaughter was started on 9-23-2011, which was exactly one week ago. Pardon me for sounding naive, but why don't those 8,000-10,000 people have their name on the petition????Why has it taken a week of tireless effort on the part of dozens, if not hundreds of people spreading the word about the petition around the clock to be able to collect only 3,000 signatures. As I said before,  I do not understand the world in which I live, it is a strange and foreign place, compared to the world I knew from my earlier days.


I can't seem to grasp the concept that all the decisions that have to be made in my life "should" be based on financial criteria. While I understand that we no longer live off the land and barter for what we need to survive, I still can't seem to get the hang of worshiping money above all things. The things I value do not have a price and are not up for the highest bidder. Mainstream society of the current era, tells us over and over that what we are missing we can attain if we have the sufficient coinage to pay the fare. I don't fit in and I'm thankful for it. The rules I follow don't fluctuate with the current market or the roller coaster ride status of the economy. They are steadfast and constantly guiding the path I choose. While financial issues effect us all, rich and poor and everyone in between, we should eventually be able to tell the difference in money and wealth. Wealth is not stored in a bank, it lives inside us and is demonstrated in how and when we draw the line on issues that cross the line of humanity.


NOW, about the lie I told today. This is the rest of the story, (as Mr Paul Harvey used to say). We received a report from a concerned citizen about another "at risk horse". It's been awhile, but we just had not been able to get over there to check on this horse. We knew it's situation wasn't good but at the same time not  yet a matter of life or death. We were told that he/she was thin but not super starved. We were told that the horse was routinely tied out to a long rope, without a halter. We were told that the water source was a 5 gallon bucket, which was often overturned and laying on the ground. With that information alone, that tells me that the horse is at risk but not yet in bad enough shape to be able to get the local law enforcement involved. So I had dreaded going over there because, there isn't really anything we can do to intervene. We loaded up this morning and drove to the place we were told about. We saw no horse. It was our intention to drive by and take fotos to document the condition of the horse so that when he/she got in worse condition we could prove that the horse was in a state of decline.......It's kinda like before and after photos except worse because, the first foto would show him/her in better shape and the next in worse shape and worse and worse, which is a very sad status to witness. We drove by and could not see the horse. We'd been told that he/she would be tied somewhere in the vicinity. At that point the plan of driving by to photograph the horse was a bust so on to Plan B. I'd seen someone in the yard when we drove by the first time, so I  decided to go knock on the door. As I walked up the driveway, I had no idea of what to do or say. Feeling a bit nervous, I knocked on the door and when they answered, I said
<<<<here comes the LIE>>>>,
I said, I heard you have a horse for sale ????
They naturally looked at me, like they had no idea what I was talking about. So smiling my friendlest smile, and trying not to look like a out and out bold-faced liar, I asked how old is the horse ???? Is the horse here ???? And would it be possible for me to see it ???? In rapid fire sequence without taking a breath or batting an eye. They agreed to show me their horse. 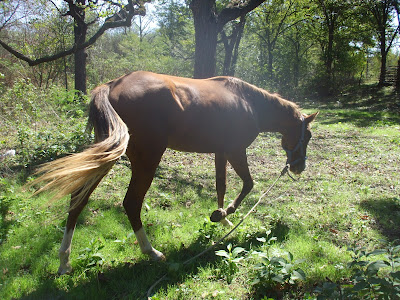 We walked out behind the house and I saw her.......the horse that has NOT been gentle on my mind since her existence and less than ideal circumstances we're brought to my attention a few weeks ago. She is a 2 yr old sorrell filly with 3 white feet and a blaze face. She was standing under a grove of big oak trees. She was grazing but looked up to watch us walk toward her. I asked if she was wild ???? They said no. I asked if she kicks or bites ??? They said no. I asked if she leads??? They said yes. I asked if she loads in a trailer???? They said yes. When I ran out of typical questions a prospective buyer might ask, then I said how much would you take for her, in my best horse bartering voice. They said $250. I asked them if I could go get my camera out of the truck and get some fotos of her. They said yes. I told them we carry extra halters and asked them if we could put one on her and get that rope off her neck. They said yes. I went for the camera and the halters. We put one of our halters on her and they tied the rope to her halter. I felt immediate relief to see the rope being taken off her neck. Being tied up, I still don't like, but at least she now has a halter. I know you are angry with the owners and you are right....it is wrong. I only spent 15 minutes with them but they seemed nice enough but obviously don't know any better. When they asked me if I have horses. I said yes. They asked me how many horses do I have. I said  ALOT of horses. They asked me "how many". I answered without skipping a beat.....TWENTY FOUR. The look on their faces was one of disbelief and then they asked me "why so many".....I told the TRUTH.....I am a horse rescuer. I also told them that I have been involved with three law enforcement agencies in this county and picked up horses seized from individuals that either did not or could not provide them adequate care. I got their names and phone number and gave them my name and phone number and said maybe we could work something out on the price and would be talking to them sometime soon.  I told a bold faced lie to a complete stranger today and I justified it to myself and the Great Creator by telling myself that in was for a good cause. It's late, I should get some rest because tomorrow will arrive in about ten more minutes. Somethings, actually many things are NOT gentle on my mind, and that little red filly is one of them. She's been on my mind for weeks, now she's heavy on my heart. Good Night Sweet Susana, at least now you have a halter instead a rope tied around your neck. I don't know IF or HOW we can help you, but please know you are NOT forgotten
Posted by Triple O Ranch Equine Sanctuary at 8:10 PM